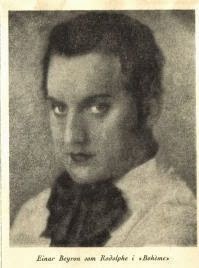 
His real name was Ejnar Bengtsson and he received his education in , and . To his teachers belonged V. Lincke, Louis Bachner and John Forsell. In 1924 he made his debut at the Royal Opera in as Glad in the ‘’Rheingold’’. He married in 1932 the soprano Brita Hertzberg (1901-1976). Both artists were for long years till 1954 leading opera singers of the Stockholm Opera, where they appeared together with pleasure and had a huge success. He was estimated especially in the operas of Richard Wagner. In 1929 he appeared in in the premiere of the opera ‘’Engelbrekt’’ of Nathanael Berg, in 1939 in ‘’Kathrin’’ of E.W. Korngold, in 1939 in ‘’Marionetter’’ of Hilding Rosenberg, in 1945 in ‘’Lycksalighetens ö’’, in 1948 in ‘’Raskolnikoff’’ of H. Sutermeister. Concerts and guest performances led him to , , , , and the . In 1940 he received together with his wife the title of a Swedish court singer. In 1947 he made guest appearance at La Scala as Tristan in R. Wagner’s ‘’Tristan und Isolde’’. In 1948 he sang at the Teatro Liceo in the part of Parsifal. Still in 1959 at the Stockholm Opera he appeared as Tristan. His repertoire included Lohengrin, Walther von Stolzing, Tannhäuser, Lyonel in ‘’Martha’’, José in ‘’Carmen’’, Don Carlo, Kalaf in G. Puccini’s ‘’Turandot’’, Hoffmann in ‘’Hoffmanns Erzählungen’’, Julien in ‘’Louise’’, Pelléas in ‘’Pelléas et Mélisande’’. He also came out as an operetta tenor and as a concert singer. In 1946 he received the Swedish order ‘’Litteris et artibus’’. Since 1947 he was a member of the . He also was a successful director of the Stockholm Opera. His daughter had under the name Catarina Ligendza a successful career.

Posted by Ashot Arakelyan at 8:25 AM