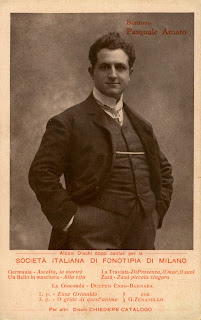 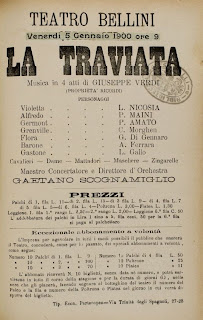 He studied with Benjamino Carelli and Vincenzo Lombardi (teacher of Fernando de Lucia) at the Conservatory San Pietro a Majella. He made his début at the Teatro Bellini in Naples at the age of 21, singing Germont père in La Traviata. His career began at this early time and he soon appeared in roles such as Lescaut, Escamillo, Renato and Valentin. He sang at the Teatro Dal Verme in Milan, in Genua, Salerno, Catania, Monte Carlo and appeared in Germania and Russia. He was extremely successful in Donizetti’s Maria de Rohan and Leoncavallo’s Zazà. In 1904 he appeared at Covent Garden for the first time. He also alternated Victor Maurel and Mario Sammarco as Rigoletto. He sang again Escamillo and Marcel. He soon enjoyed huge success in South America and appeared there in all his roles. In 1907 he was celebrated at La Scala, where he sang Golaud in the Italian premiere of Pelléas et Mélisande. He added Kurwenal (opposite Salomea Krusceniski and Giuseppe Borgatti) and the roles in Catalani’s La Wally and La Gioconda. In 1908 he was engaged at the Met. Here he sang frequently opposite Enrico Caruso, mainly in the Italian repertoire. His most successful roles at the Met were Luna, Carlos, Ashton, Tonio, Rigoletto and Amfortas. He created Jack Rance in Puccini’s La Fanciulla del West in 1910, opposite Emmy Destinn, Enrico Caruso and Adamo Didur. His repertoire included about 70 roles. He also appeared in various contemporary operas by Cilea, Giordano, Gianetti and Damrosch. From the beginning of his career he overused his wonderful voice. Vocal decline began in 1912 (he was 43 years old!) and from 1920 his career was relegated to appearances in provincial theatres and on tour with various companies. He spent the last years as professor of voice and opera at the Louisiana university. Comment: He is one of the greatest Italian br.s of all time. You hear a splendidly firm br. voice with a true ring in the upper register (up to high A). His voice is very individual, and it is almost impossible to confuse him with any other br.. He sings with a smooth legato and perfect articulation. It is a truly thrilling voice. I have the impression that he frequently sings with too much muscular tension. This might be one of the reasons for the early vocal deterioration (?). Renato’s Eri tu, Rigoletto’s Cortigiani and the Duet opposite Frieda Hempel, the Enzo-Barnaba Duet opposite Zenatello, the Figaro aria, his Jago, the truly exciting performance of the scene Amonasro-Aida opposite Ester Mazzoleni, the Pagliacci Prologue, all these are “classical” performances and belong to the best br. recordings ever made. He sings with an inimitable combination of Mattia Battistini’s bel canto style and the heroic splendour of Titta Ruffo.