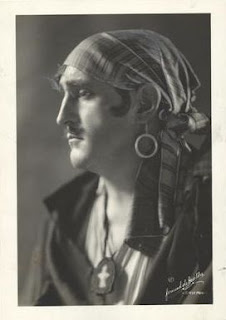 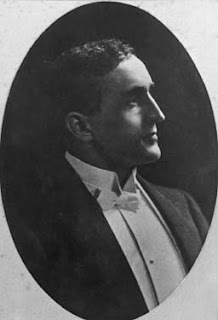 Alfred Webster Kingston was born at Sparrows Forge, Wednesbury, Staffordshire but his family soon moved to Beardall Street in Hucknall, Notts. At ten years of age, Alfred followed his father down the pit at Hucknall Colliery but spent his leisure hours in music with the St. John's Church choir and later with the Byron Quartette which included his brother William and two friends, William Holland and H.G.M. Henderson. Alfred married in 1895 and moved to the newly-sunk Crown Farm Colliery in Mansfield where his colleagues clubbed together to send him to London two days a week for speech and singing lessons with Hugo Hinds. The Rev. Stainer of Warsop Church, impressed with his singing, arranged for Alfred to have permanent lessons in London with Evelyn Edwardes. In 1909 he made his first appearance under his stage name of Morgan Kingston one Sunday at the Queens Hall in London and continued these appearances whilst still working at the pit to pay his way. A tall athletic man with a good stage presence, he was singing more and more at the important festivals of the day. In 1912, he was heard at a concert by Campini and Dippel and was engaged to perform with the Chicago Philharrnonic Opera but Dippel then moved to another company and Morgan found himself singing with the Century Opera Company. He successfully sang in Lohengrin, Samson and Delilah, La Boheme, Tosca, Pagliacci and Carmen - all in English, the normal policy of the Century Opera Company though he had mastered French, Italian and German. He could take the tenor role in 50 different operas. In 1913, Kingston sang at the White House for President and Mrs. Woodrow Wilson and was presented with a model of a Welsh harp with an American eagle at its base in solid gold. Kingston was very proud of his present and left it in his will to his son Bert. Kingston was engaged by the New York Metropolitan alongside Caruso performing most notably Manrico in Il Travatore - Campanini called him 'the greatest Manrico of his day.' He had come a long way from singing 'Nirvana' at the opening of the new drill hall in Mansfield.  Now in his forties, Kingston worked harder than ever touring with the Scotti Opera Company as well as becoming a noted oratario and concert singer while performing in First World War fund-raising events. In 1924 he returned to England to appear at Covent Garden and undertaking concert work. He sang at a Stephenson subscription concert in Mansfield and his final performance was at the Philharmonic Hall, Liverpool in November 1928. Kinston's health was failing and he finally moved to Stoke Poges - his family were now living in Canada. He died in a London Hospital on August 4 1936.

Posted by Ashot Arakelyan at 9:57 AM