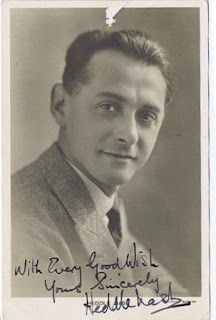 His voice was discovered by the famous soprano Marie Brema. Nevertheless, his debut was prevented by the outbreak of the First World War. He took part as a soldier in the fights in France, Salonika, Egypt and Palestine. Then he completed his study with Giuseppe Borgatti in Milan. In 1924 he made his stage debut at the Teatro Carcano in Milan as Almaviva in ‘’Barbiere di Siviglia’’ of G. Rossini. Then he sang in Turin, Genoa and Bologna and came back in 1925 to England. First he worked at the Old Vic Theatre in London (debut: Duke in ‘’Rigoletto’’), then with the British National Opera Company, where he made his debut as Roméo in ‘’Roméo et Juliette’’ by C. Gounod. In 1929 he made his debut at the Covent Garden in London as Don Ottavio in ‘’Don Giovanni’’. Since that time he had at this opera house long and successful career and appeared here until 1947. In 1932 he appeared at the His Majesty's Theatre in London in the operetta "Die Dubarry" by Millöcker-Mackeben. In the 1934-1938 seasons he had a huge success at the Glyndebourne festival as Ferrando in ‘’Così fan tutte’’, Pedrillo in "Entführung aus dem Serail" and as Basilio in "Figaros Hochzeit". During the years of the Second World War he sang with Carl Rosa Opera Company and gave a concerts before English soldier. In the 1957-1958 season he appeared again with the ensemble of the New Opera Company. His son, John Heddle Nash, (1928-94), had a significant career as a baritone.

Posted by Ashot Arakelyan at 8:07 PM