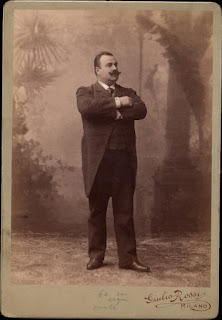 He was a pupil of Ferretti in Genova. In 1881 he made his debut at the Teatro Andrea Doria in Genova to as Enrico in G. Donizetti’s ‘’Lucia di Lammermoor’’. After perfecting his vocal technique under M. Gazzaniga, he sang in 1883 at the Teatro Dal Verme in Milan in ‘’I Promessi sposi’’ of Errico Petrella. In 1884 he appeared there among other things in ‘’La Cruz’’ of G. Sansone and in G. Verdi’s ‘’Ballo in maschera’’. In 1886 he was to be heard at the Teatro Argentina in Roma, in 1889 again at the Teatro Dal Verme in Milano as a Rigoletto. In 1890 he appeared at the Teatro Regio Torino among other things as Rigoletto and as Alfio in ‘’Cavalleria Rusticana’’. In the 1891-1892 season he was engaged by the Teatro Alla Scala in Milano; here he sang on 20. 1. 1892 in the premiere of the opera ‘’La Wally’’ by A. Catalani as Gellner. In the next 1892-1893 season he performed at La Scala as Rigoletto and as Enrico in ‘’Lucia di Lammermoor’’. In 1893 he appeared wiyh great success at the Teatro Grande in Brescia in the title part in  G. Verdi’s ‘’Falstaff’’. In 1894 and 1897 he was staying at the Teatro San Carlo in Napoli, in 1897 at the Teatro Massimo in Palermo. During the 1894- 1895 season he made guest appearances at the Covent Garden in London, among other things in the title role in the English première of G. Verdi’s ‘’Falstaff’’. By the end of his career he became a respectable Wagner interpreter. In 1899 he sang the part of Wotan in ‘’Walkiria’’ at the Teatro La Fenice in Venezia. In 1901 at the Teatro Sociale in Treviso he again appeared as Wotan in ‘’Walkiria’’. The same part he repeated also at the Teatro Regio in Parma (1906). In 1901 he sang at the Teatro Costanzi in one of six concurrent premieres of P. Mascagnis ‘’Le Maschere’’ (17. 1. 1901). In 1910 he retired from the stage. Later he taught singing in Turin and one of his pupils was well known bass Tancredi Pasero.

Posted by Ashot Arakelyan at 5:45 PM