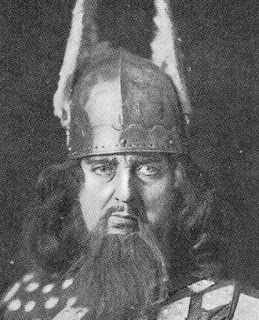 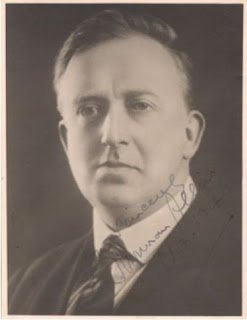 He studied at the Royal Manchester College of Music under John Acton (singing) and Walter Carroll (theory). He wed the singer Edith Clegg in 1912 and went to London, where the conductor Henry J. Wood heard him and planned to involve him in the 1914 Norwich Festival. Unfortunately, the festival was interrupted by the outbreak of World War One. However, Allin did sing the Handel aria "O ruddier than the cherry", from Acis and Galatea, at a Promenade Concert for Henry Wood during the war. (He was not called up for military service owing to the fact he was classified in a low medical grade.)
Sir Thomas Beecham auditioned him and at once offered him the title role in Mussorgsky's Boris Godunov, but Allin felt a less challenging debut was needed. So, his first appearance for Beecham was as the Old Hebrew in Samson et Dalila on 15 October 1916. With the Beecham Opera Company he appeared, too, in Verdi's Aida. He first sang at a Royal Philharmonic concert, again under Beecham's baton, in 1918. He later appeared as Boris, as Gurnemanz in Wagner's Parsifal, Hagen in Wagner's Götterdämmerung and Baron Ochs in Richard Strauss' Der Rosenkavalier at the Royal Opera House, Covent Garden. In 1921, he became founder-member of the British National Opera Company.
Allin created the role of Sir John Falstaff in Holst's 1925 opera At the Boar's Head. In 1934, he appeared in the initial Glyndebourne Festival production under Fritz Busch and Carl Ebert of Mozart's Le Nozze di Figaro. Henry Wood later wrote (in 1938) that had Allin not possessed such a retiring disposition, he might have become one of the world's most celebrated operatic basses, and that even so, his stage roles numbered almost 50. During the Second World War (1939-1945), he was a member of the Carl Rosa Opera Company. This company gave London seasons, during which Allin appeared alongside fellow singers Joan Hammond, Gwen Catley, Heddle Nash, Dennis Noble, Parry Jones and Tudor Davies.
Allin's career was not restricted to opera, however, and he was perhaps best known to contemporary music-goers as a concert recitalist and an oratorio singer. He appeared before the Royal Philharmonic Society in a Royal Choral Society Beethoven Missa Solemnis in 1927 under Sir Hugh Allen. In 1932, after giving his 270th performance of Handel's Messiah, at a Halle concert, he decided not to sing the part again.
He always gave the greatest satisfaction when he sang in music festivals, and Wood felt that he could trust him with anything. He was one of the soloists in the original line-up for Vaughan Williams's Serenade to Music on 5 October 1938. Allin's line goes down to low D; the words set for his solo are 'The motions of his spirit are dull as night, And his affections dark as Erebus.' He was also in the performance of it for the Royal Philharmonic Society, on behalf of the Musicians' Benevolent Fund, in February 1940.
In 1934 he took part in a seven-month operatic tour in Australia, appearing mainly in Melbourne and Sydney. On his return he was offered a professorship of singing at the Royal Academy of Music, and took it up in autumn 1935. Later he also accepted a similar appointment at the Royal Manchester College, which he held jointly with the other, only resigning the Manchester post in 1942 owing to pressure of work in London.
Among Allin's pupils were Jean Allister, Pamela Bowden, Richard Lewis, Norman Lumsden and Ian Wallace (who followed his teacher into the role of Bartolo at Glyndebourne).
Allin's voice possessed a depth, authority and resonance rare in modern-day British basses, the preferred style of voice now being lighter and less magisterial. His singing technique was exemplary and his vocal production was smooth and extremely attractive in tone, as his recordings verify.