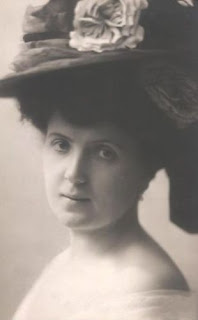 She began her singing studies with Wally Schauseil in Düsseldorf and continued with Richard Müller in Dresden. First she appeared in concerts and oratorio parts. At the instigation of the great conductor Ernst von Schuch, who appeared in Dresden, she turned to the stage career. She made her stage debut in 1907 at the Hofoper in Dresden (as Marguerite in ‘’Faust’’), where she remained until 1910. From 1910 to 1913 she was engaged by the Court Opera in Berlin (where she had already performed in 1909), from 1913 to 1921 she was a soloist of the Deutsche Oper in Berlin-Charlottenburg, in the 1921-1923 seasons she sang at the Staatsoper in Berlin. Here she appeared as Pamina in ‘’Zauberflöte’’, Micaela in ‘’Carmen’’, Freia in '’’Rheingold’’, Eva in ‘’Meistersingern’’, Marguerite in ‘’Faust’’, Rosalinde in ‘’Fledermaus’’ and Octavian in ‘’Rosenkavalier’’. Guest performances and tours led the artist to England, Belgium, Holland and Switzerland. In the 1920s she undertook two major North American tours. During her Dresden engagement she appeared on 25. 1. 1909 in the world premiere of the opera ‘’Elektra’’ by R. Strauss. After 1923 she gave only single stage performances, but was mainly to be heard as a concert soloist, such as 1926 on a Holland tour and, also in 1926, in London. In her second marriage she was married the director of the Electrola record company, Leo Curth. After her retirement she lived in Berlin and taught singing, but in 1935she emigrated to North America.

Posted by Ashot Arakelyan at 5:59 PM