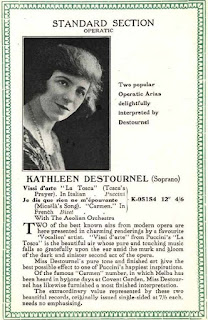 Kathleen Starling was born on July 30th 1890 in Aylsham and was the youngest of four girls. Her father was William Frederick Starling (he left his memories of Aylsham which has been published by the society) and her mother was Katherine Annie Rees Starling, nee Corney.
Kathleen became an opera singer, her father paying for many singing lessons as she grew up. According to Dad some of these singing lessons were undertaken in France.
She had a stage name, it was Kathleen Destournel (French for Starling) and she kept that name for all her public performances. Apparently she did start her career using her name, Kathleen Starling but later changed it to Kathleen Destournel and it was then that she had success.
Dame Nellie Melba (an Australian opera singer) brought Kathleen to Australia to sing. Kathleen's autograph book seems to confirm that she did come to Australia to perform. There is an autograph in the book indicating she sang at 'Her Majesty's Theatre' in Melbourne during March 1911. At this stage none of her family had immigrated to Australia. Her sister, my grandmother, did not come to Australia until 1926.
Kathleen certainly sang in operas with Dame Nellie Melba. She appeared in a number of operas at the Royal Opera House, Covent Garden including 'La Boheme' in 1919 where she sang with Melba in front of the King and Queen. She had the part of the musette in the second act.
Kathleen also played in a number of benefits and Murray Keable (her nephew-my fahter) stated that she gave a performance in their barn on their farm, 'The Grove' at Horning for troops during WW1.
Kathleen continued to sing and perform in a range of theatres and eventually married an American, Robert Taylor. Robert or Bob as Kathleen called him was an American entertainer. In 1939 Bob joined The Entertainment National Services Association- ENSA and he and Kathleen entertained British Forces in England.
In 1942 they were asked to organise a concert party to go overseas. They left London on the 'Monarch of Bermuda' during an air raid. It was a ship that normally took 360 passengers but on this trip there were 5,000 personnel. They gave three concerts below deck.
They stopped in Capetown, South Africa for three days and then continued on their trip. They disembarked near Suez and took the train to Cairo. Altogether there were 42 artistes. Kathleen and the other artistes performed at camps near Cairo and then went to Alexandria. From there they travelled throughout North Africa in very trying circumstances at times.
According to Kathleen, "My husband would always arrange to place the stage in a hollow so that the audience would be raised on the sand hills." Often the lights would fail and Kathleen would have to finish her songs in the dark. Every time the entourage would arrive at a camp, there would be a tremendous cheer when the women stepped out. It was the first time in years that some of the men had seen women from home.
Kathleen continued to travel around Egypt and experienced bombings, travelled on buses riddled with bullets and with no windows to get to the camps in order to perform.
She stated that they usually zigzagged to avoid holes but on one occasion they couldn't avoid the holes and they felt everyone one of them as they drove to the next camp. She thought it would be much better to be on a camel. At one stop Kathleen discovered their billet had originally been Rommel's headquarters during the German occupation. Kathleen's group also entertained the American troops as they travelled around as part of an arrangement with the USO.
Eventually, Kathleen's husband became ill and the doctors said he should return to Cairo. However, the troop carriers were congested and it was difficult to arrange. Not only did Kathleen get to take her husband back to Cairo but she bullied, pleaded and eventually managed to persuade the officials to transport all her costumes with them.
It was whilst Bob was in hospital in Cairo that he read the book written by his sister in law Rosemary Taylor. It was called 'Chicken every Sunday' and he decided that he would retire to where his brother and sister in law lived in America. Incidentally, this book was made into a movie.
In 1946 Kathleen and Bob went to America via India and settled in Tueson, Arizona.
Kathleen remained there until Bob's death and then she returned to England and to Aylsham where she lived with her sisters until their deaths and then on her own until her own death.
She also had another stage name and that was Kathleen Reilly.

Posted by Ashot Arakelyan at 1:59 PM